In this example we’ll replace the included avatar model with Unity’s Ethan model from the Standard Assets package to demonstrate how to configure a new humanoid avatar. https://www.assetstore.unity3d.com/en/#!/content/32351 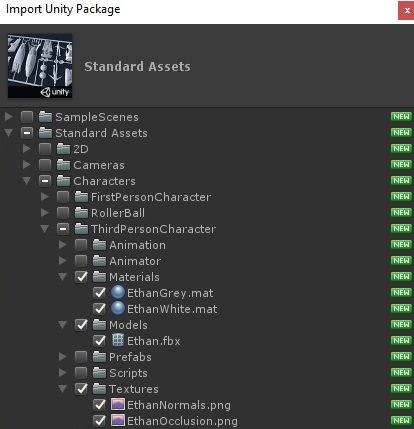 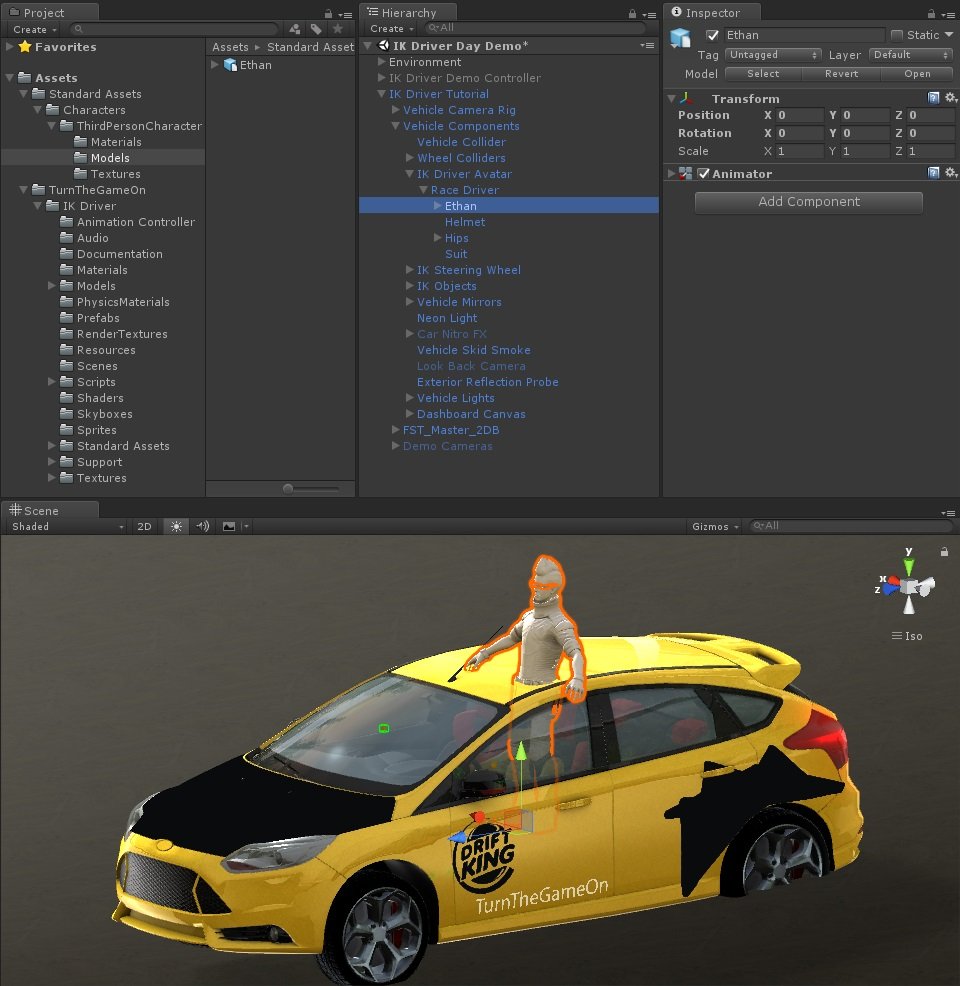 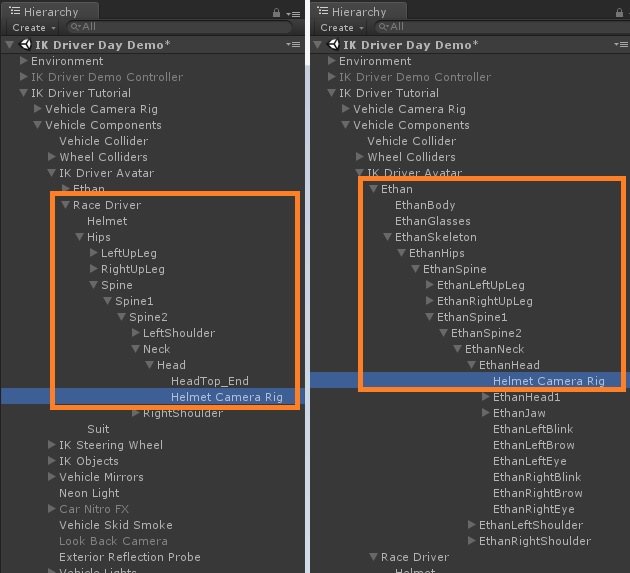 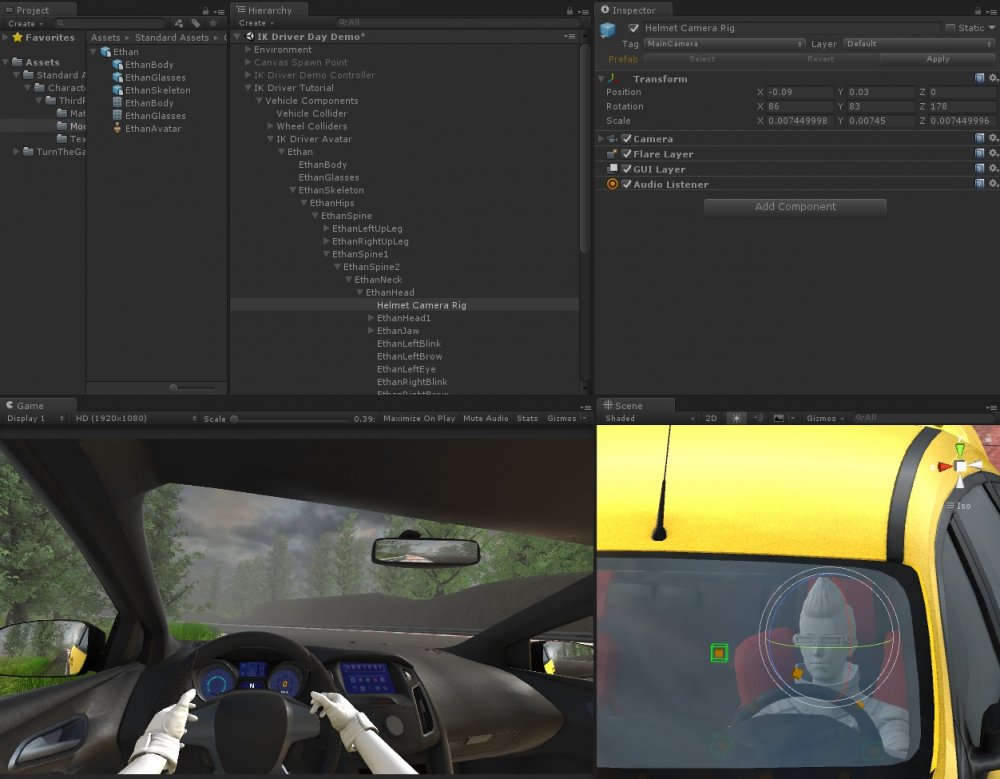 For Ethan, he is a model of a teenager, so he’s a bit smaller compared to a full grown adult; you will most likely run into small adjustments that need to be made on a case by case basis, as we see here for Ethan, depending on the body type of your model. We could have also increased the scale factor in Ethan’s fbx import settings to make him larger in this case, but then he’s not a kid anymore. This process will be a multi-step process so let’s break it down.

10.1 First let’s adjust the steering wheel’s transform position to be in Ethan’s hands while in play mode. Find a good spot and copy the new transform values, exit play mode and paste the values. 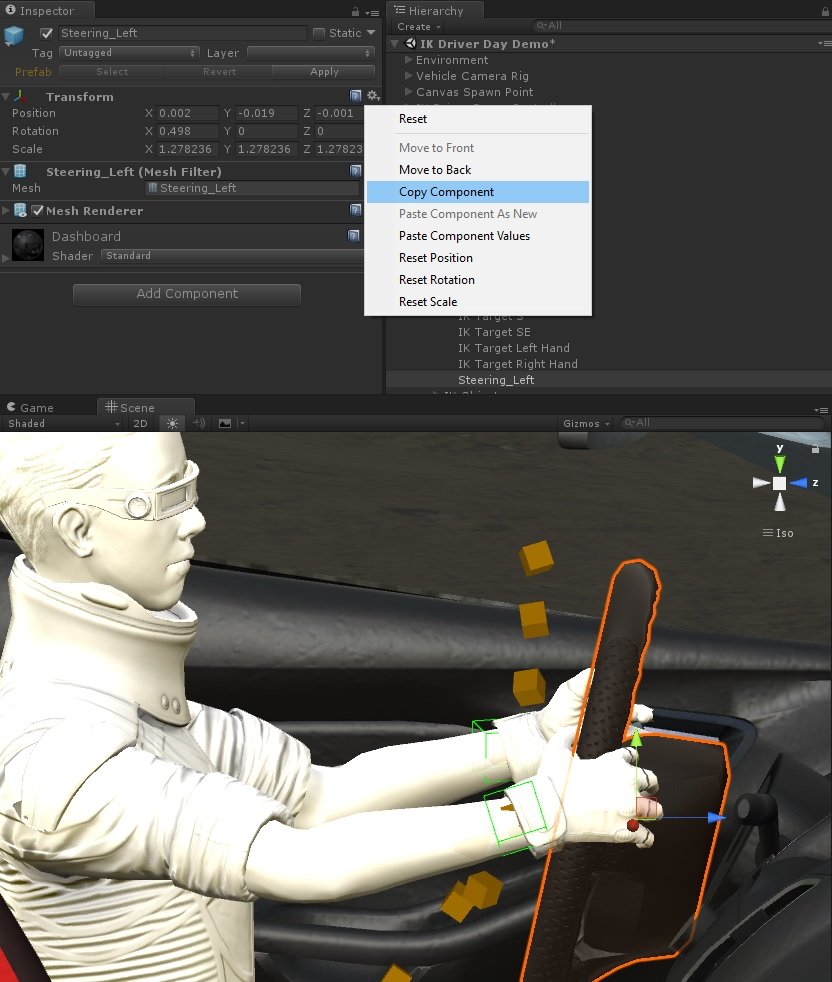 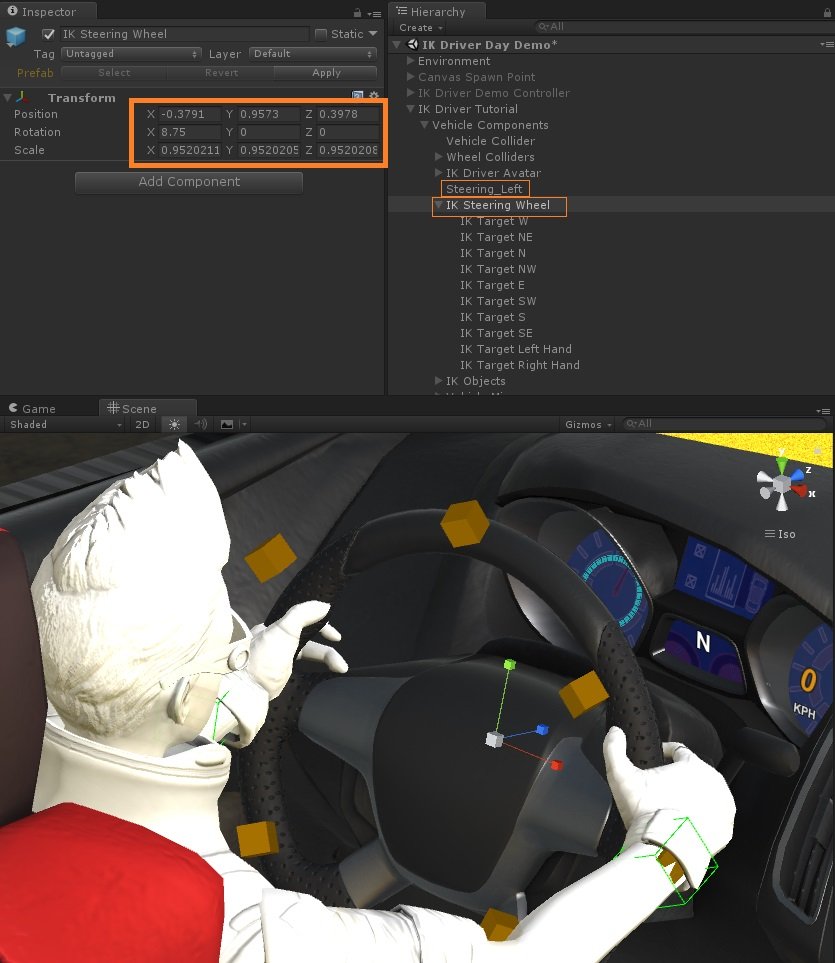 10.3 You can now re-parent the “Steering_Left” object to “IK Steering Wheel”, Ethan’s hands should now be on the steering wheel. Press play and take a look at your scene view, make additional IK Target adjustments if necessary, in my case I’ll adjust the “IK Target W” used by the left hand to reposition where it rests, copy then paste the new transform value outside of play mode. I can also move the “IK Target E” to place that hand on the wheel as well if I wanted. 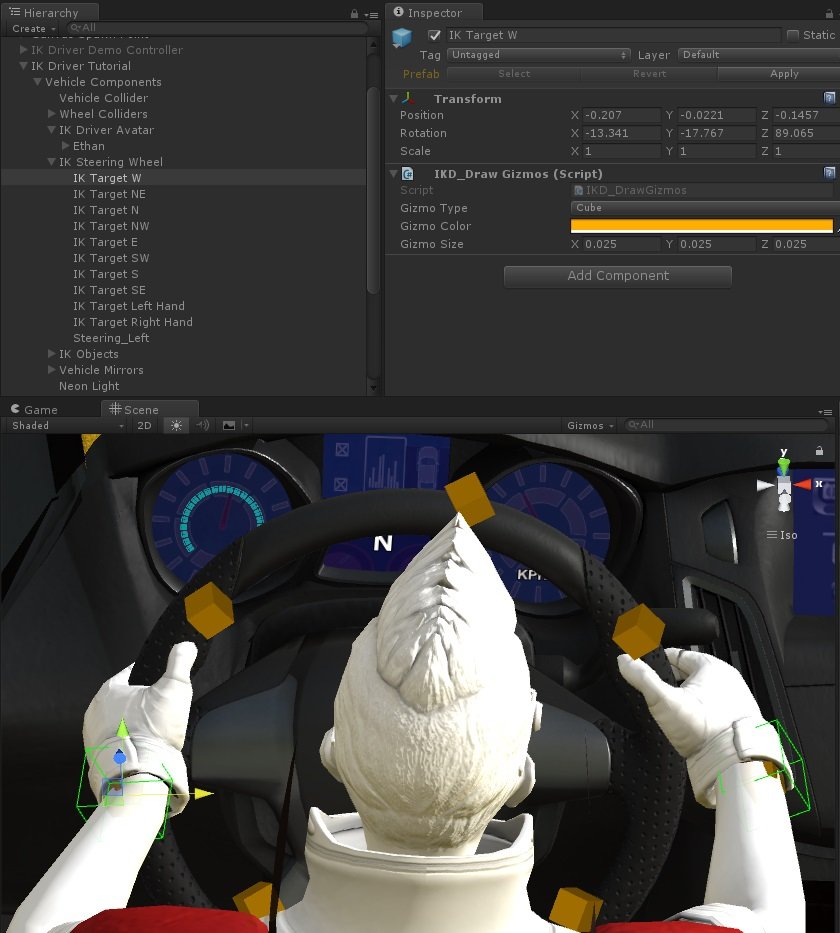 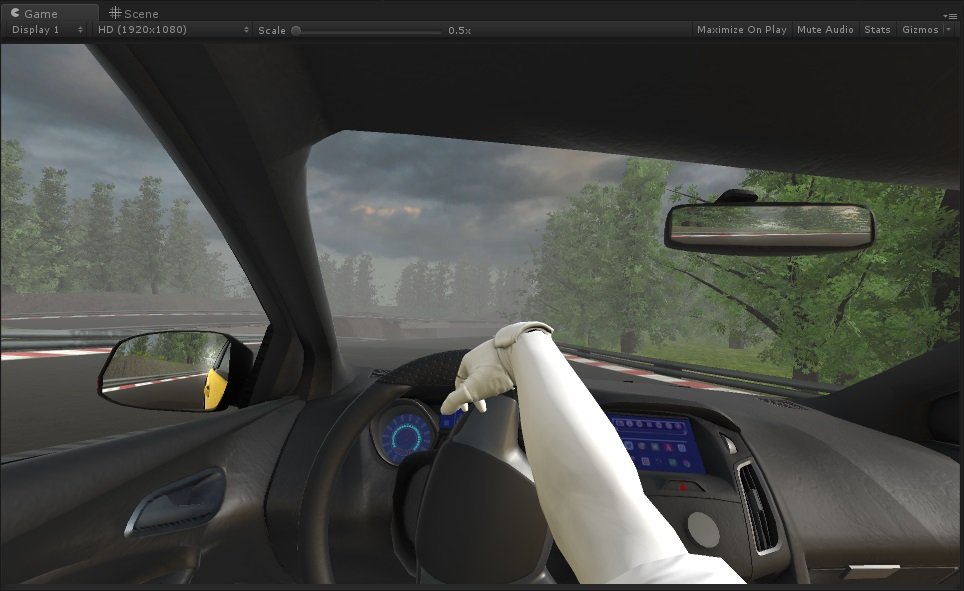 11.1 Enable play mode and select the “Ethan” object, use the scene view transform move tool to bring him closer to the steering wheel, you’ll notice from my example that his arms now have some bend to them which allows him to always be able to reach the steering wheel as it rotates to a position farther than he was able to reach before. I also moved him up on the Y axis a little since he’s so short. Copy the new transform value and exit play mode. 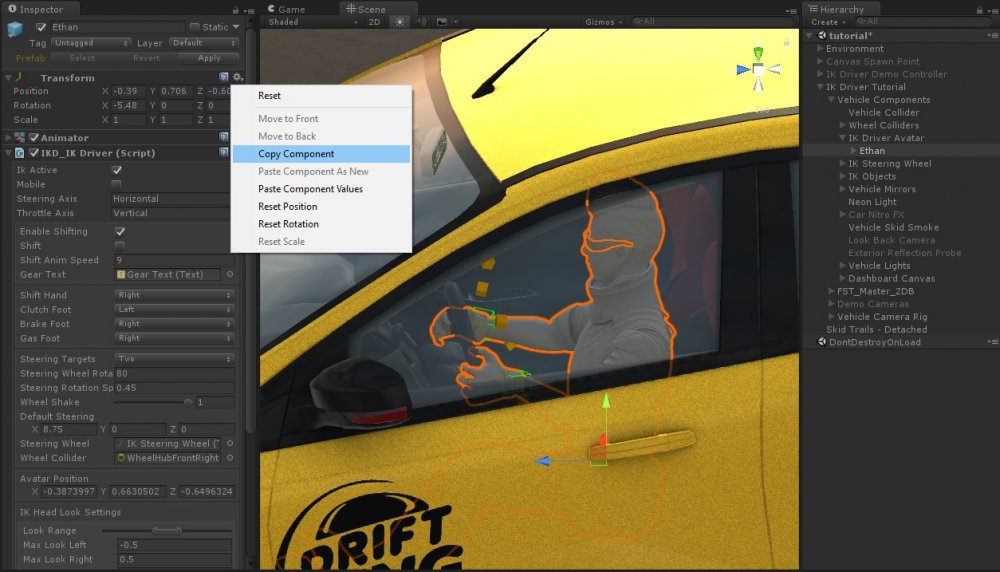 11.2 Paste the new transform values from the previous step onto Ethan’s transform, then in the “IKD_IKDriver” script assign the new avatar position value. 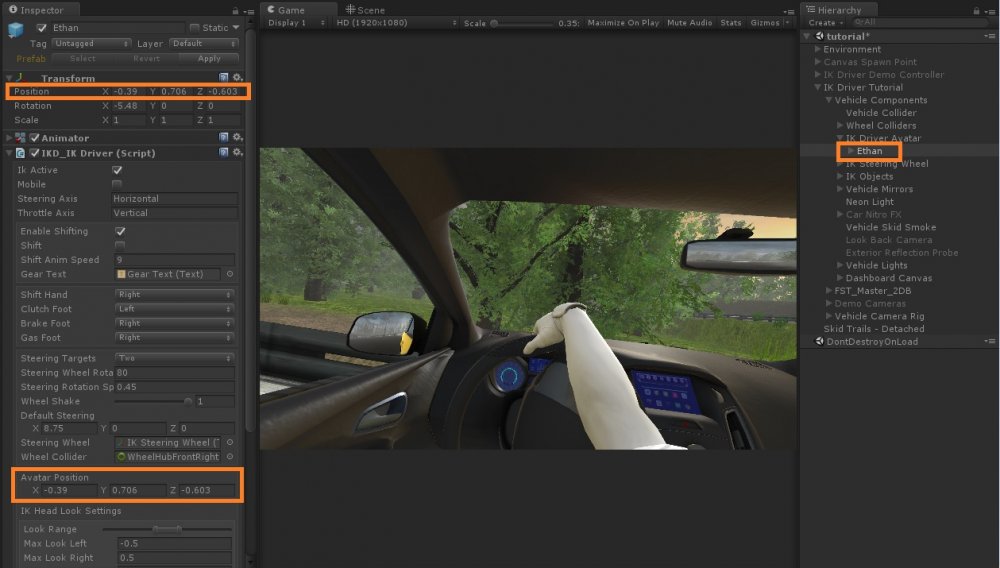